Enter the Parkinsons Fun Run, an event to raise money for Parkinsons, they had 3 events on offe – 8km run – 4km run or 4km family walk on  flat track around Olympic Park.

So this was my first serious attempt at running an entire “fun run”. I was as nervous as hell about this one, considering I had only run 1km without stopping for the first time the DAY BEFORE but I was determined to give this my best shot, and I was going with my gals, this time it was Leonie, Kyleanne, Michelle, Tracy, Renee, Meredith & Karen.

Now Kyleanne had been “helping” me run for the past 2 weeks, Ok so some would call her helping more like yelling and pushing, but It was helping and it was exactly what I needed.   She had got me through the 1km so all I had to do was repeat that 3 more times … GULP

I was registered for the 4km run along with Tracy, Michelle and Renee Kyleanne and the others were all registered for the 8kms, but Kyleanne had been sick L an was going to swap to the 4kms and run with me ( YAY 🙂 ),  no problems, I had not met Renee before and would be meeting her for the first time on the day we were all meeting at Tracy’s house again, getting picked up by Leonie again… all good I love our car pooling and meeting new people.

Ok so get up in the morning bright and early and my phone is going nuts, buzzing away… disaster… Leonie is sick L and cant make it..  omg omg omg what to do…..  Renee to the rescue, she will drive us, still meeting at Tracys, same time disaster averted . ( except our lovely Leonie is still sick 😦  )

We arrive at the event a bit later than planned and missed the start of the 8kms, but we were able to cheer on our lovely gals Karen and Meredith as they passed us on their first lap, and then again as they crossed the finish line. 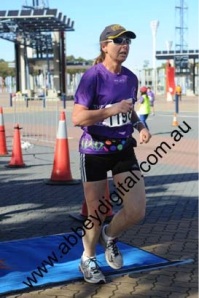 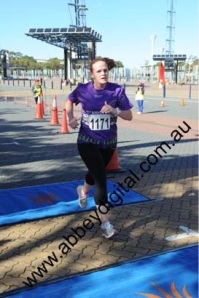 It became apparent pretty quickly that this was an actual “fun run” and they expected us to run… oh SHIT!!   They had a time limit because the family walk would be starting soon… CRAP!!       I had been secretly hoping that I would be able to run the 1st km or 2 then slow down to a powerwalk…….

Also it was a pretty small turn out less than 100people, GULP no hiding or getting lost in the crowd here.

So the warmup begins, and we watch YES WATCH from the sidelines.. one last trip to the loo before lining up, and BANG we are off…..

I jogged the first 2.5kms without stopping, I wanted to stop so many times but Kyleanne was right beside me and kept encouraging me. I did slow down to a walk for the next 500mtrs, to regain my breath and have a drink, then back to a jog for the next 500mtrs, then another little walk again, THEN we came to the part of the track that enters the Olympic athletics stadium,  well it goes without saying you HAVE to run when you are on the Olympic track. It was hilarious we were running through the empty stadium waving our arms, taking bows, thanking ourselves and our families… SO MUCH FUN J !!  We got out of the stadium and it was only another 500mtrs to the finish,  I was determined to finish this thing jogging BUT as usual Kyleanne had other ideas, Ok she says when we get to the fence we are going to sprint…OMFG… are you kidding me, I don’t have anything left to sprint……. We get to the fence and she says ready lets go yelling come on run faster faster faster…….. I don’t know how the hell I pushed myself but we did it we sprinted the last 100mtrs, I could see Renee Karen and Meredith at the finish line cheering and screaming for us… It was the MOST AMAZING FEELING….. I ❤ my gals … 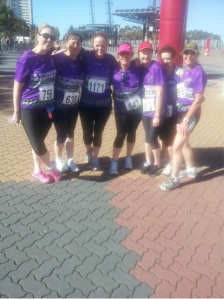 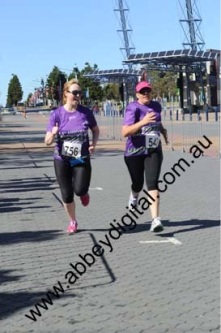 The morning was a HUGE success, we had around 30 people turn up for the walk at 6am a few of the regulars and lots of newbies.

After the walk we got stuck into the fitness test, Now I have always dreaded the 1km run part of the test, and even now im into my 4th round I have NEVER EVER run the full 1km, always get about 1/2 way give up then walk the rest,

I have always believed I could not run… I never really liked running, its hard and your legs hurt, you cant breath, blah blah blah

AND I LOVE IT

So what has changed… well firstly,after comitting fully to round 2 I am fitter that i have ever been,

BUT the most significant change for me has been my beautiful friend Kyleanne, she refused to allow me to continue with my ” I cant run” ranting, and has been helping me over the past 6 weeks, I have learnt more from Kyleanne  over the past few months than I have from 3 rounds of the program, She believes in me, and she has encouraged me to keep pushing, I cant express how grateful and lucky I am to have such a lovely person come into my life.

If it was not for her I would have been content to continue plodding along, dont get me wrong I love exercising but I never had a desire to want to run.. we are now planning on doing the Canberra 1/2 marathon next year GULP..

But I have met so many wonderful people doing this program and am so grateful for each and everyone of them.

My life has turned completely around, my weekends are now booked with fitness and fun of course yummy food afterwoods

Its one thing to be determined and passionate  but to share that passion with friends is priceless!!

City2Surf – The biggest fun run in the world

Growing up and living in Sydney the City2Surf was of those things that I always wanted to do, just to be able to say that I had done it, I would see it every year on TV and think… how awesome would that be… to be in that crowd… it just looked like so much FUN J

Last year ( 2011 ) I did it for the first time, I met a girl online through the biggestloserclub website and we bit the bullet and entered…. weighing in then at 103kgs my only goal was to finish it… which I did in 2:44

This year I was excited to do it again, lighter and fitter I was aiming to smash my previous time and do it in under 2hrs… I also wanted to get a photo of myself in the same place I had a photo taken the year before for comparison

Its great to have goals, but I have also learnt its even more important to have fun and to share that fun with friends….

I set up an event on FB and registered a team…. TEAM AWESOME!!

We organised a mini bus to drive us in and pick us up… no waiting in line for trains / buses for us, we are going in style …. or as much style as a school mini bus offers anyway..

It was freezing, gale force winds, temps around 8degrees… but that was not going to stop TEAM AWESOME.. 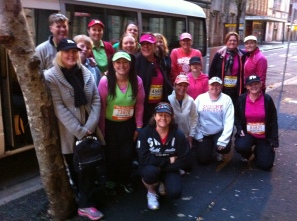 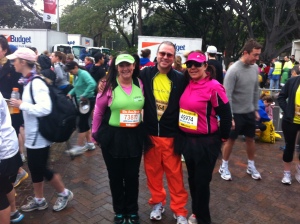 We arrived at Hyde park at 630am and the atmosphere was AMAZING thousands of people buzzing around… Sandra and I spotted Neil Perry in the crowd and sheepishly asked for a pic..

There were a lot of nerves from the “city 2 surf virgins “ as we spilt up into our groups Leonie Kathy and myself had all done this before but for everyone else it was their first time. 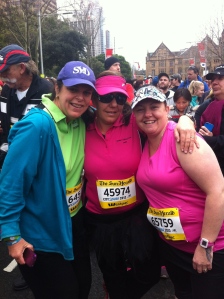 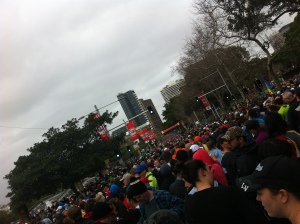 2 of our girls were very nervous

about the whole thing, even after we started they were constantly looking around to make sure they could still spot me, Now up until this point I had been solely focused on me and determined that I was going to smash my previous time and do this in under 2hrs, but seeing the 2 girls starting to freak out at the crowd size and the sheer size of the whole event I decided I would walk it with them instead…..

At the 5km mark one of the girls started to panic and making comments about not being able to finish, I knew how disappointed she would be if she let those demons win, so time for a change of tatic….  photos… with any character we could find…  we had photos with smurfs, gorillas, and even a yak!! 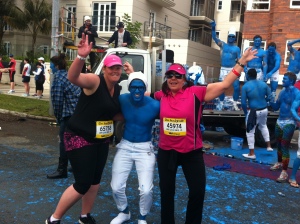 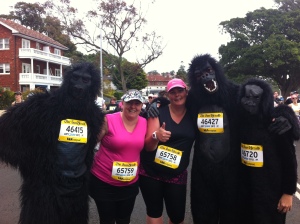 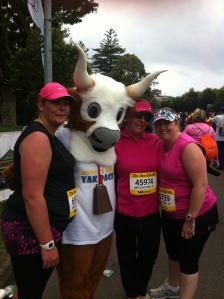 We had a BLAST!! and after a few more km’s she was confident enough to let us jog off ahead….

One more quick stop for that comparison pic and Jodi and I were on the home straight, we finished the race in 2:21mins.. Not the time I had been hoping for BUT.. helping 2 friends conquer their fears and enjoy themselves is well worth it….

Next year I aim to jog the entire distance,  and my time will be whatever it will be…..

My unfinished business is weighing me down!!

The highs & lows of marathon training

Have you ever caught sight of yourself and thought OMG, that was me in 2009 now here is my weightloss story

Make Sure It's Worth Watching

One day your life will flash before your eyes. Make sure it's worth watching.

The wonderfully weird words from my brain

I will be fit and happy, not fat and hippy

no make that - fit and happier!

From Average to Fabulous

the journey of the new improved me

The latest news on WordPress.com and the WordPress community.